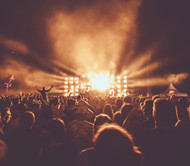 Summer is just around the corner -- which means that it's time to score those tickets for your favorite music festival. This list is an overview of some of the biggest and best music festivals and street markets in the world, from the hills of Tennessee to the posh tourist resorts of Europe.

While some festivals (such as Coachella and the iconic New Orleans Heritage and Jazz Festival) take place in the spring, most of the premiere music festivals take place during the summer months. (Although we did include one early autumn listing, Austin City Limits, which is held in October.)

No trip to a world-class music festival is complete without a camera, so use this as a quick guide capturing the best moments from your festival experience.

The Packing Essentials to Capture Every Moment

Half the fun of any music festival is sharing out the experience with others. From your favorite sets to selfies with your friends, here is your essential list of items to pack to capture every moment:

Whether you stay for a day or for a week, you're sure to get lots of great photo opportunities -- so before you leave, it's a good idea to check out your camera (or smartphone) and make sure that everything is in good working order.

If you decide to invest in a new camera or phone, be sure to give it a trial run before you leave. Likewise, familiarize yourself with all its bells and whistles. That way, you won't be fumbling with the wrong buttons when your favorite superstar comes within the perfect close-up range between shows.

To make the most of your scenic or crowd shots, consider investing in a wide-angle (or wide-conversion) lens so you can get an impressive panoramic shot. If you have a compact camera that doesn't have interchangeable lenses, a wide-conversion lens will widen the viewing angle and fit a lot more into the frame.

Some of your best shots will be of your favorite bands, so here are some tips on how to capture the most memorable live performance photos:

In other words, if you're not well-versed in photography, let your camera do the work for you by setting it in aperture priority mode, which will automatically adjust the shutter speed and automate the overall process. Having said this, if you really want the best photos, see the next step.

Manual mode will give you the control you need to adjust to quickly-changing light displays and other factors. It's really the best method for shooting live concerts, but manual mode does require some expertise and extra work (such as learning to adjust exposure and shutter speed). However, the results will be worth it.

3. Use a faster shutter speed

According to the pros, you'll need to set a shutter speed of at least 1/200 sec, or you'll end up with blurry photos.

Because it provides a larger aperture, a fast lens enables you to maintain the same exposure even when you're using a faster shutter speed. This is crucial for clearer shots, especially at night.

First, many venues don't allow flash photography because they can cause distractions onstage. Even when it's allowed, flash mode won't help, and can actually distort your image.

This will enhance your camera's ability to capture lighting effects.

Autofocus will give you the best frame for the most important part of your image, whether it's the lead singer or another band member you want to focus on.

8. Use a wide-angle lens

Use a wide-angle lens if you want to capture everything that's happening onstage.

Note: In some circumstances, performance photographs might not be allowed, so be sure to check before the concert starts.

Understanding How to Shoot at Night

As for capturing those spectacular lighting effects at night, experts recommend starting with ISO 1600, using aperture priority or manual mode settings, and setting your shutter speed at a minimum 1/250 sec.

Use interchangeable lenses based on shutter speed, the pros recommend using a fast lens (such as 50 mm f1.8). If this sounds too technical or you're using a compact point-and-shoot, just remember to start your ISO setting at 1600 and shoot in manual mode.

If you're shooting with a smartphone instead of a camera, the good news is that you can use a variety of apps (such as Manual Camera) to enhance night shots. To diffuse or soften light, consider covering your phone flash with tissue paper or a color filter. Night shots also work better if the camera/phone is stable, so consider getting a small portable tripod. Likewise, you can also use photo editing software tools from apps such as EyeEm to enhance the quality of your pictures.

Now that you're ready to capture a festival, here's our list of the best, must-see music festivals this summer, along with a few tips for the best photo opportunities at each one.

At Lollapalooza, you'll find everything from classic rock and alternative to hip hop, electronic and heavy metal; and in a music industry that loves to categorize, this diversity brings a breath of fresh air to the festival scene. More than 100,000 fans of all ages come from around the world to enjoy the something-for-everyone atmosphere (and boisterous hijinks from rowdy fans).

What began as a hippy music fest in 1970, Glastonbury typically attracts more than 175,000 worldwide fans who love the festival's retro peace-and-love vibe, awesome musical diversity and spontaneous street entertainment (sometimes the spectators are as good as the show). As festivals go, many people feel that this iconic event is simply the best.

From its beginnings as a pre-1970 counterculture event, the Isle of Wight Festival entertains around 90,000 fans every year with an appealing line-up of classic and hard rock icons mixed with top-notch indie and electronic newcomers.

As one of the biggest festivals around (catering to more than 450,000 fans each year), Austin City Limits is another music fest that celebrates diversity, offering up a roster that includes everything from 80's rock superstars to hip hop and indie performers.

Another celebration of musical diversity, Bonnaroo offers a high-powered roster of talent performing on multiple stages set along 650 acres of rolling farmland. Around 76,000 fans gather each year to enjoy a mix of rock, pop, reggae, gospel, folk, country, bluegrass, indie and Americana performed by the biggest names in music.

The popular Governors Ball is a favorite with indie/alternative rock and hip hop fans, but this eclectic festival also features Americana, folk, pop, and classic rock musicians. About 150,000 folks each year enjoy not only the music but also the funky carnival atmosphere, which abounds with classic New York food trucks and carnie-type games and activities.

A top world destination for electronic music fans, Tomorrowland is considered to be the premier electronic music festival. Attracting as many as 450,000 fans, it features the world's best DJs and electronic music performers doing their thing on multiple stages, all enhanced with breathtaking high-tech lighting effects.

Founded in Brooklyn, the multi-venue AFROPUNK (it's also held in Atlanta, London, Paris and Johannesburg) is a true arts festival. This festival celebrates all types of live music, film, art and fashion produced by black artists. Like its sister venues, Brooklyn AFROPUNK offers a wide variety of genres and caters to around 70,000 enthusiastic fans each year.

Nürburgring Race Track and Zeppelinfeld in Nuremberg, Germany from June 7-9, 2019

Rock am Ring / Rock im Park are two music festivals that take place simultaneously in Nürburgring and Nuremberg. Attracting more than 150,000 people, the festivals feature a diverse roster, headlining famous classic rock icons, hip hop newcomers, and everything in between. The super-charged atmosphere is akin to a rock-and-roll Oktoberfest, so be prepared to party.

Advertised as eight days of music, activism, arts, camp, and freedom, Roskilde has a delightfully retro hippy vibe coupled with cutting-edge talent, featuring the world's best performers in classic and hard rock, hip hop, reggae, electronic and world music. As one of the world's largest festivals, it attracts as many as 149,000 visitors to this picturesque Danish city -- and all profits are donated to charity.

Download has become a favorite yearly destination for fans of heavy metal, punk, and alternative rock. In the UK it's second (size-wise) only to Glastonbury, attracting as many as 110,000 people who enjoy communing with the high-energy music and then relaxing in the massive festival campground.

Showcasing a mix of rock, punk, metal, alternative, and indie music, the Reading and Leeds Festival was founded in Reading during the 1960s and is actually one of the oldest music festivals in Europe. Thanks to its history, as well as its reputation for booking some of the biggest names in music, it attracts around 85,000 people a year and appeals to people of all ages.

One of Europe's biggest and most diverse music festivals, Primavera Sound offers an amazingly eclectic roster of performers from nearly every modern musical genre, ranging from classic/hard/punk rock to electronic, indie, alternative and jazz. Catering to as many as 200,000 fans, Primavera Sound features multiple venues, and also showcases a popular film festival.

One great way to document your festival experience is to create a photobook that you can share with your friends. If you're a regular festival goer, you can organize your pics into chronological albums (such as "Bonnaroo 2016 -- Vol 1").

Another method is to organize your albums according to artist names, so you can quickly look up all the photos you took during favorite performances.

An easy way to tell the story of your festival adventure is to organize the pages by theme or experience. For example, if you're camping, you can have one section filled with layouts featuring your camping experience. Other pages could feature scenery, while still another section could showcase fun crowd shots.

Whatever type of music you like, be it rock, pop, reggae, jazz, blues, country, folk or Americana, these 15 festivals run the gamut of musical genres and offer something for everyone. For the best experience, try to book your tickets online as early as possible -- and be sure to bring along a good camera so you can take plenty of once-in-a-lifetime pictures of your festival adventure.